Branding is nothing less than the reflexion of the horse´s origin. It reveals who is the breeder, farmer and even though it may have different owners, its origins will always persist. We shouldn´t confuse this with the microchip, which is a form of documentation, its ID. Currently there are many IT resources, however not long ago this was replaced by a tattoo engraved inside the lip, especially in the case of PRE (Pure Spanish Breed) for its identification and to avoid robberies.

Branding can be falsified however the tattoo, or in the case the microchip is not possible. In fact, back in the day falsifying was an act of vandalism, which was punishable by law even by death sentence. We shouldn´t forget horses were used as war weapons, sort of a “tank” during this period. Any respectable soldier would take care of its own horse and of course, the “warriors who were always on horseback” were associated with them.

So, what is the branding process? Back in the day, this was done via fire-heat method, this is the quickest. Nowadays, this can be done with nitrogen instead of using heat (from outside to inside) this is done by freezing (from inside to outside).

Going into detail of the meaning of iron branding, we must realise that each one has its own legend. This particular stud farm´s legend refers to the noble title par excellence related to Villena the Marquisate. Surely you have heard of the Marquess of Villena on some occasion, as there is a historic TV series called “Isabel” where you can watch the role of Juan Pacheco magnificently played by Gines Garcia Millan, the meanest villain nonetheless has captivated us all.

In the case of stud farm, the logo refers to this the historic dualism of the Marquisate: which relies on Villena, and Villena relies on Marquisate. For this reason on one side the “M” is narrower than the other, and this also applies to the “V”. This also sports a which refers to its ancestry, in turn inspired by the city shield. Pretty clever, right? 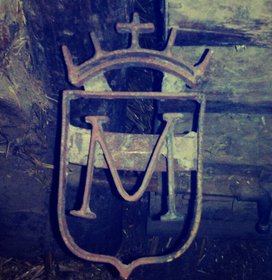